The Amos Biggar House c.1816, 502 Dundas. It is believed that Amos Biggar, a United Empire Loyalist, built the original rectangular section of this house. it is a good example of the Classic revival. The house consists of a 1 1/2 storey rectangular original section with single storey additions to either side, quite possibly constructed by its next owner, Philip Box.

Knox Presbyterian Church Sixteen c.1846, 1150 Dundas Street West. The church was designated in 1978, represents a Gothic Revival style reproduced on many churches of this period. The church is heavy buttressed on the front and along the sides of the building. In 1899 the church underwent some changes to the original frame, which was remodelled and bricked over. In 1925 the interior of the church was redecorated and the wood cedar shingles replaced with asphalt shingles.

The Squire James Appelbe House c.1850, 257 Dundas Street East. James Applebe came to Canada in 1815 and married Jemima McDuffy a descendent from the UEL family who were early settlers in Trafalgar Twp. arriving in 1808. James Applebe was postmaster, storeowner, Justice of the Peace, Treasurer of Trafalgar Twp. and one of the first directors of the Bank of Toronto. The house is an example of rural Oakville Vernacular style. It is a 1 1/2 storey farm residence, with a side gable roof, a central gable dormer, and a five bay facade. Four unique full-length windows with transoms distinguish the front elevation.

King’s Castle 21 Regency Court c.1854. Built by William Mackenzie King, a publisher who called his home Solitude. It was designated in 1978. It is a distinctively styled brick Gothic Revival House, with tall narrow gables, steeply pitched roof, pointed windows and decorative bargeboards and dependents. In 1858 there was a verandah around the building added by its fourth owner the Merry family. The book “God Is In The Attic” by H. Merry tells of the time his family lived in the home.

The Featherstone Farm House c.1870, 185 Burnamthorpe Road West. Built by farmer, John Featherstone. The house was taken over by his son William. William was Mayor of Oakville in 1914 and 1915. The house is of a Victorian Gothic style with a central gable and Gothic arched window. The interior has high baseboards, original wooden floors and ornate ceiling mouldings.

1105 Sixth Line, c.1870. Built during the early 1870’s for Jeremiah Hagaman. He was considered a carriage man of distinction and set up a factory in Oakville. He was one of Oakville’s first councillors, representing Ward One from 1859 until at least 1862. The house is a good example of second empire architecture, with a straight with flare mansard roof with hooded and scrolled dormers, bracketed cornice and decorative woodwork.

Munn’s United Church c.1898, 5 Dundas Street East. The first church on this site was erected in 1844 and was Methodist. A larger brick church was built in 1898. It is a well preserved example of Gothic Revival style prevalent in church architecture during the nineteenth century. It has retained the pointed windows, a palladian styled window, brick buttresses and stone window sills.

Trafalgar Township Historical Society hosts their Open Archives at the heritage Palermo Schoolhouse. Check the calendar below for the next scheduled day. 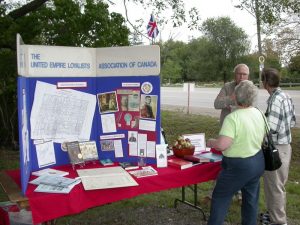