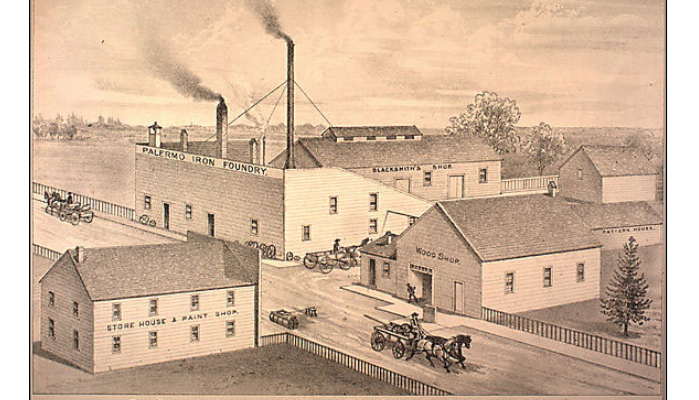 Trafalgar Township began as a system of trails and trade routes created and used by the Indigenous People. The Haudenosaunee, Anishinaabe and other Indigenous Nations traveled the Red Hill trail, which ran along the original Lake Ontario edge across Trafalgar Township. The trail connected to the 16 and 12 mile creeks, culminating at Indigenous settlements in the area. The trail still exists today running alongside Leighland Avenue.

Small hamlets formed along concession lines laid out one mile and a quarter square. As the Pioneers built log homes using wood gathered from their new properties, the Indigenous People were required to obtain permits to gather wood from the same land.

In the 1830’s, Trafalgar Township became a busy stagecoach stop from Hamilton to York (Toronto). Roads had to be planked to support the heavy traffic flow. In the 1850’s, the agricultural industry prospered with the creation of new technology, and the high demand for wheat.

The political boundaries of Trafalgar Township ceased to exist with the amalgamation of the Township, the Village of Bronte and the Town of Oakville in 1962. However, the geographic boundaries remain with Trafalgar Township extending from Lake Ontario on the south, Winston Churchill Blvd to the east, Burloak Drive to the west, and extending north, over rich farmland, to Steeles Avenue.

However, Trafalgar Township’s legacy continues in the original roads and concessions which are still in use today. As for the original trail which traversed Trafalgar Township, the QEW highway follows much of the former path which was originally blazed by the Indigenous People. The trail reminds us that Oakville-Trafalgar is located on the treaty lands and territory of the Mississaugas of the New Credit. Oakville-Trafalgar would not be the same without the original trails, paths and roadways which continue to connect us together.

Trafalgar Township Historical Society hosts their Open Archives at the heritage Palermo Schoolhouse. Check the calendar below for the next scheduled day. Please note: If Halton school buses are cancelled due to poor weather, our Archives Open event on that day will also be cancelled.