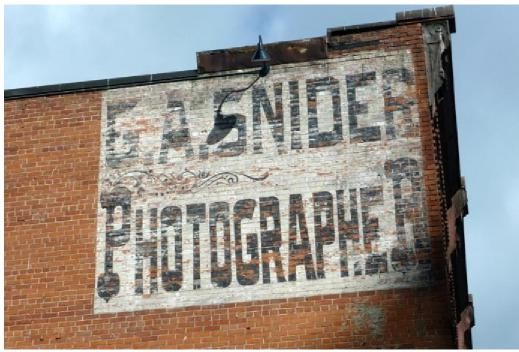 In 2010, a building on Bank St., Ottawa, was removed opening a space between buildings that revealed a sign (G.A. Snider, Photographer) painted on the side of a 3-story, red-brick building at the northwest corner of Bank and Slater. The sign launched Howard’s 4 year project to learn more about this largely unknown 19th Century Ottawa photographer.

George Albert Snider was born in 1856 in Trafalgar Township. A few years later, he moved with his parents to Brantford, where, as a teenager, he developed an interest in photography. He moved to Montreal in 1875 and opened a photographic studio. He died in Montreal in 1940.

More details of Howard’s talk are available in the next Member’s Newsletter.

Trafalgar Township Historical Society hosts their Open Archives at the heritage Palermo Schoolhouse. Check the calendar below for the next scheduled day.